In performances   of concert and recital works by Bach, Beethoven, Chopin, Liszt, Prokofiev,     Schumann      and     others,  Georgian pianist Dudana Mazmanishvili’s  lyrical gifts and exceptional virtuosity have won critical acclaim on stages around the world. Prizes include the Busoni Competition (Bolzano, Italy), the August Everding Prize in Munich, the Dorothy MacKenzie Award at the International Keyboard Festival, and the Nadia Reisenberg Award in New York City, which resulted in Mazmanishvili ‘s New York City recital  debut  at  Merkin Hall.

Mazmanishvili made her Carnegie Hall debut in a recital at Zankel Hall that critic Harris Goldsmith described as “staggeringly virtuosic   and powerful” by the Classical   Music   Review.   In recent seasons, she   appeared   throughout Europe and the United States. Mazmanishvili has appeared at Vienna’s Musikverein, the Konzerthaus Berlin, the Salle-Cortot in Paris and the Phillips Collection in Washington, D.C.  She has  performed at  the  Gasteig  Philharmonie  in Munich with the Bach Collegium Orchestra, and with the Georgian Symphony Orchestra, the Prague Symphony Orchestra,   and  the  Nordwestdeutsche   Philharmonie.   She was named   to “Rising   Star”   lists   in International Piano Magazine and Musical America.

Drawn to music at an early age, Mazmanishvili began piano lessons with her mother, Tamar Apakidze, at the age of three.   As her mother nurtured her musical skills, Mazmanishvili continued her studies at the Munich Hochschule with pianist and pedagogue Elisso Virsaladze, and in New York City at the Mannes School of Music with Jerome Rose.

Her debut recital at Klavierfestival Ruhr in Germany was broadcast by Deutschlandfunk and her performance was featured on the Festival CD selection. During the years 2013-2018, Dudana Mazmanishvili has shared her pianistic career with her mission as cultural attachée, promoting the Georgian culture and awakening attention for a place with rich historic roots. 2018 she was named a member of the European Cultural Parliament. In 2019, she founded the annual TBILISI PIANO FEST.

Her debut recital disc of works by Bach, Busoni, Liszt and Rachmaninoff was recorded by the Bavarian Radio for the OEHMS label. Her newly published CD of works by Schumann for the label CUGATE CLASSICS is receiving widespread critical acclaim.

Last year she gave her debut at the Berliner Philharmonie, perofrming Beethoven Concerto No. 3, the Elbphilharmonie Hamburg and the Konzerthaus Berlin. 2019 she appeared at Nikolaisaal Potsdam, the Young Euro Classics Festival in konzerthaus Berlin, which was broadcast by ARTE, Pärnu Music Festival in Estonia with Kristjan Järvi. 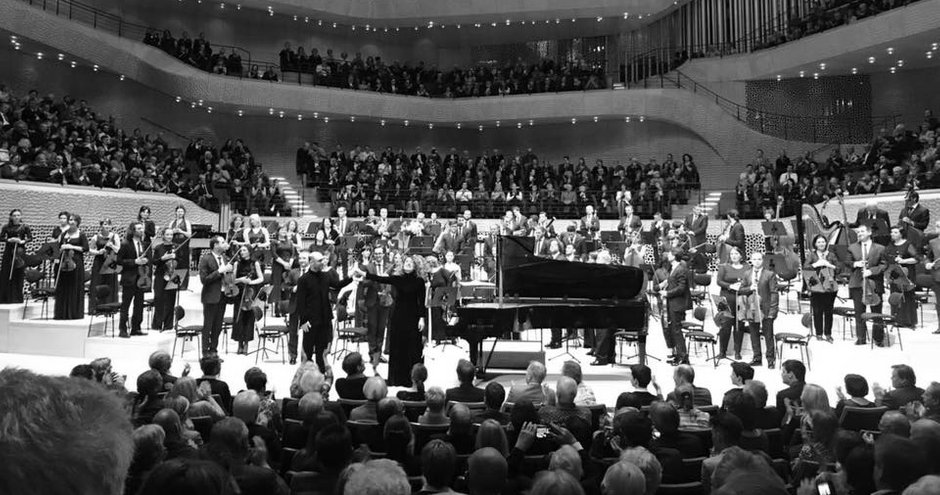